Attacked From All Angles

“Attacked From All Angles” is the first short film (Drama) presented by A-Diamond Entertainment. The film won best short film in the 2021 Kwanzaa Film Festival and is now an official selection in the 2022 Hip Hop Film Festival. The piece highlights a small congregation that is divided on “Black Lives Matter” as gun violence at the hands of the police and local gangs affect two of their own.

The #1 Urban Stageplay “Man Of The House” returns to The Soho Playhouse in NYC – October 2022 (in recognition of National Domestic Violence Awareness Month).

The play was written, directed, and produced by A’ndre Davis. The play premiered at the Luna Stage in West Orange, NJ in August 2014. Since then, it has continued to run throughout the Tri-State area and beyond. The production has also been utilized at colleges/universities as D.V. educational programming.

“Man Of The House” is a dramedy (drama/comedy) that revolves around one man’s struggle to save his relationship and get his life on track, while his woman runs the house and everything in it.  Domestic Violence with a twist, as the male is the victim as opposed to the abuser. The comedy in the play never centers around the actual abuse, therefore audiences are being educated while being entertained. The play has featured various up and coming artists from the NYC Tri-State area. In addition to writer/producer/director, the leading male role of “James” is played by A’ndre. His experience as a singer includes opening for some of the best in today’s R&B music including Jaheim, Tamia, Tank, Joe, Avant, Brian Mcknight, Anthony Hamilton, Patti Labelle, and Wendy Williams to name a few. Theater credits include “Dreamgirls”, “After The Walk” featuring Kelly Price, and “Underneath It All” featuring Kierra Sheard. The play also features Pretty Ricki Fontaine, a comedian who has been featured on BET’s Comic View and Magic Johnson’s Aspire Network.  Featured past celebrity guests include R&B Singer/Actress “Monifah, R&B Singer/Actor “J-Boog” of B2K,and R&B Singer/Actor – Willie Taylor of the R&B group “Day 26” and Love & Hip Hop.

Although a comedy, “Man Of The House” touches on some very relevant issues. Domestic violence with a twist, the effects of unresolved issues, and generational curses are some of the topics discussed in the piece. This play is guaranteed to leave audiences both young and old satisfied.

In The Spotlight Magazine Article

Man of the House Review

Man of the House the #1 urban stage play made its debut at the Jim Wise Theater in Newark, NJ for its 3 year Anniversary! The story focuses on two main characters Kesi played by RnB diva Monifah and James played by New Jersey native recording artist A’ndre Davis.

Man of the House tells the story of a couple struggling through their relationship but when one tries to move forward the other is pulling away. Bringing a twist to the average storyline this stage play shows a strong black man going through a rough time financially but doing everything in his power to cater to, love and respect his non- appreciative woman.

Monifah played her role perfectly, so well that at the end of the show I was looking at her in disgust and rooting for James to move on and be great. The dynamics of their relationship is so relatable and can really hit close to home, which I believe pulls the audience deeper into the story. You might even catch shout-out from the Audience like “Be strong my brotha”! Along with the high emotional scenes the comedy really made the stage play a must see!  Isaac, Best friend of James played by Steven Strickland kept everyone cracking up “keeping it real” with James and hands down had the best Denzel Washington impression I ever seen! Character Mimi, best friend of Kesi played by comedian Talithia Lewis aka Pretty Ricki made sure to keep audience in tears with her unapologetic humor and larger then life personality capturing the essence of that crazy best girlfriend that everyone has! For those who want to enjoy a relatable dramatic story line full of laughs Man of the House is truly #1 and a must see. I rate this play 5 star out of 5!

In The Spotlight Magazine 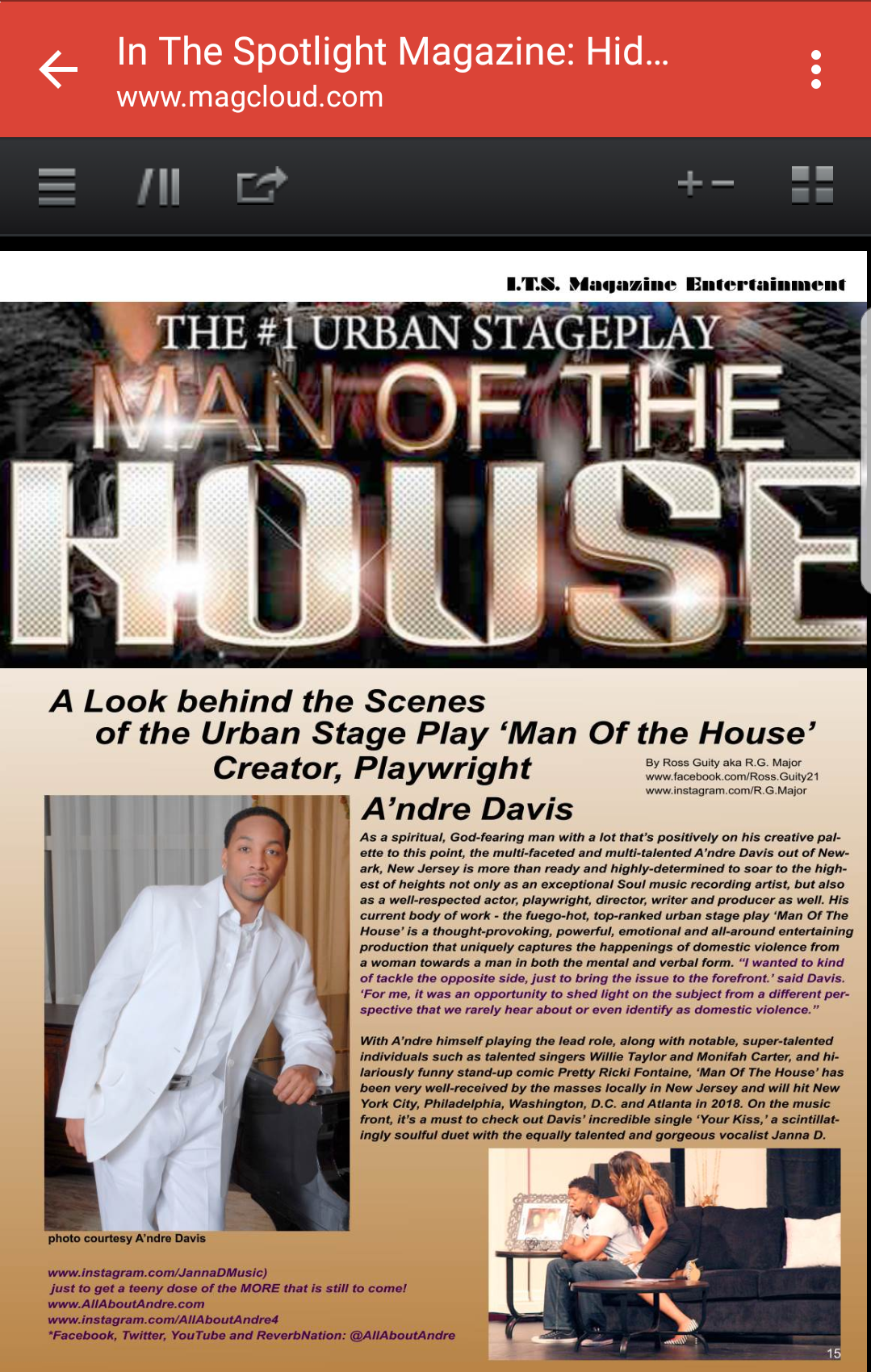 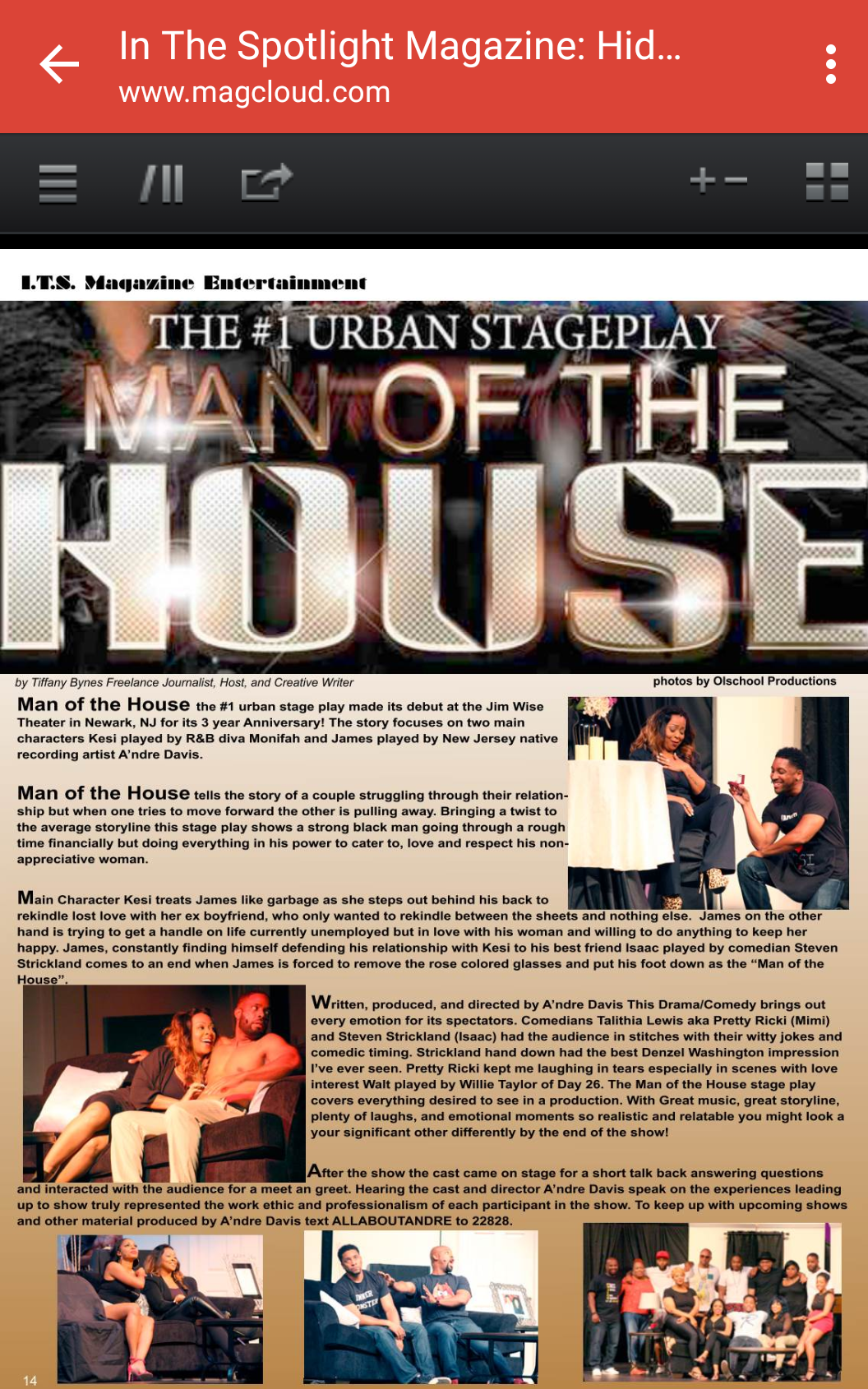 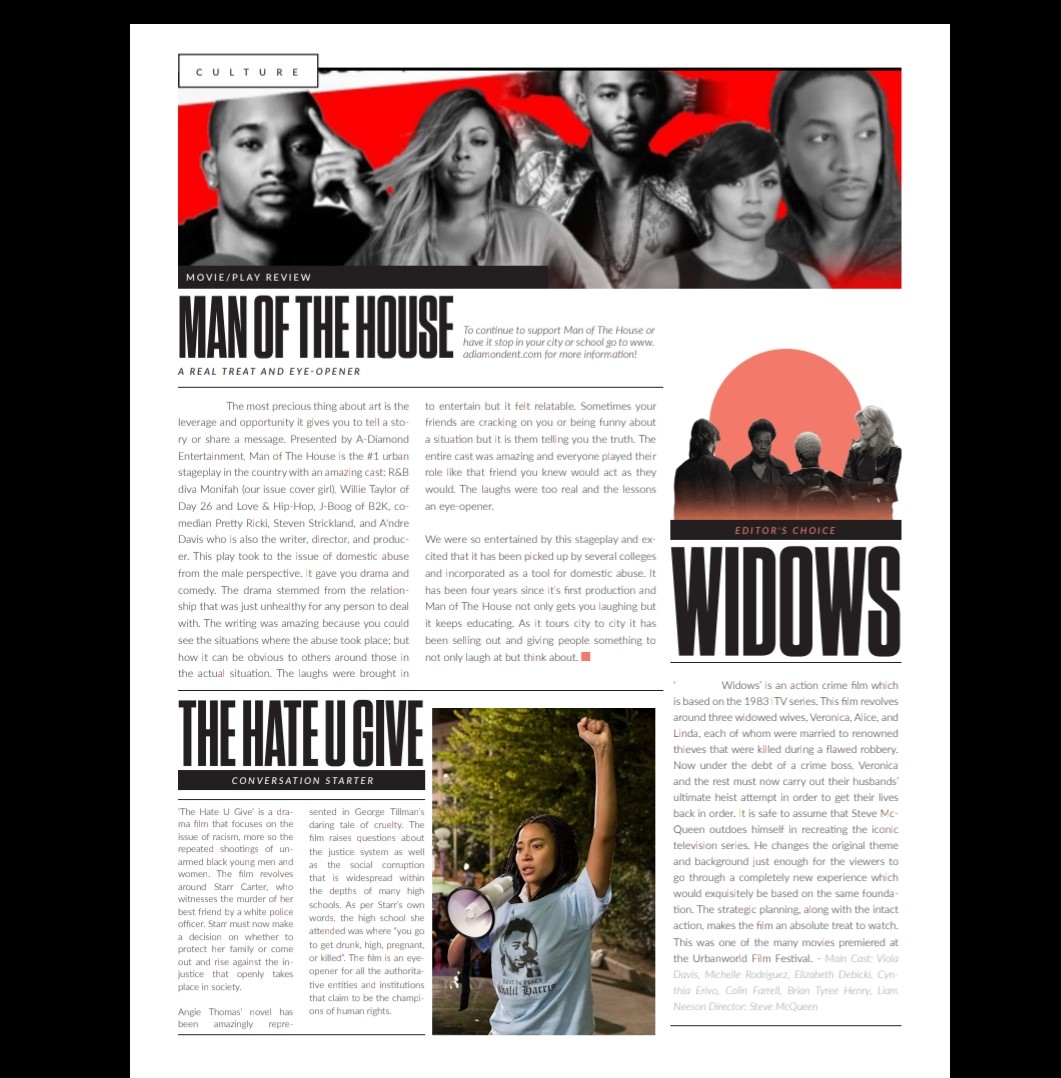 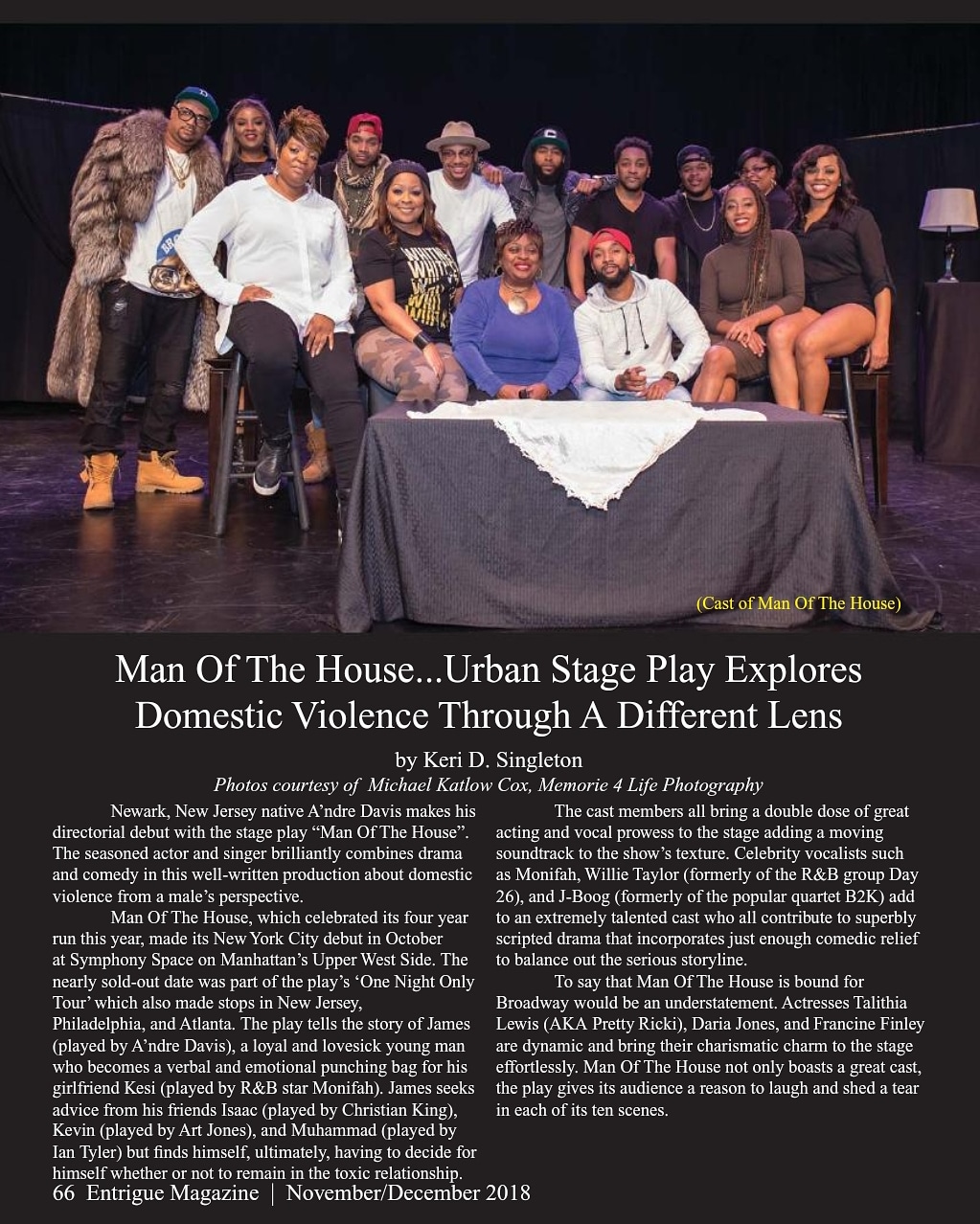 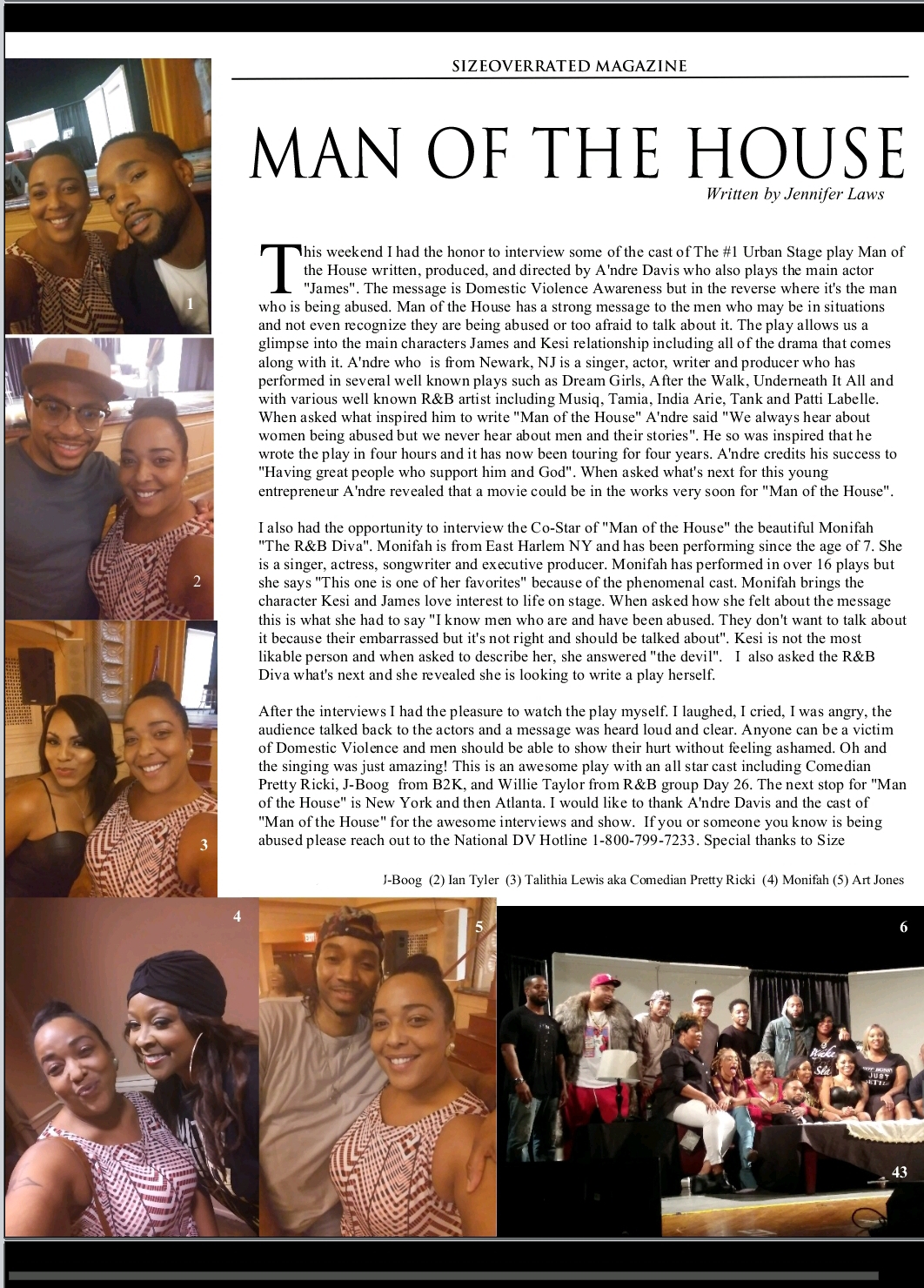 One Night Only Tour Promo

“The BreakDown” is a production that tackles the issues of substance abuse, bullying, and violence as it pertains to today’s youth.  The premise of the play focuses on how the breakdown in the home is a direct catalyst for youth to become susceptible to any/all of the above issues.

This is one of the newest productions being presented by A-Diamond Entertainment. Written, Produced, and Directed by A’ndre Davis. The production premiered February 4, 2020 at Coppin State University in Baltimore, MD. Additional shows to be announced very soon.

“Is This What We Paid For” is a (1) act stage-play that poses a simple question. If activists who perished during the civil rights era were able to come back present day to see how African-Americans  currently live, would they feel their sacrifice was wort the fight or was it all in vain?

Copyright All Rights Reserved © 2016 Created by Bent Design
Contact Us

We're not around right now. But you can send us an email and we'll get back to you, asap.